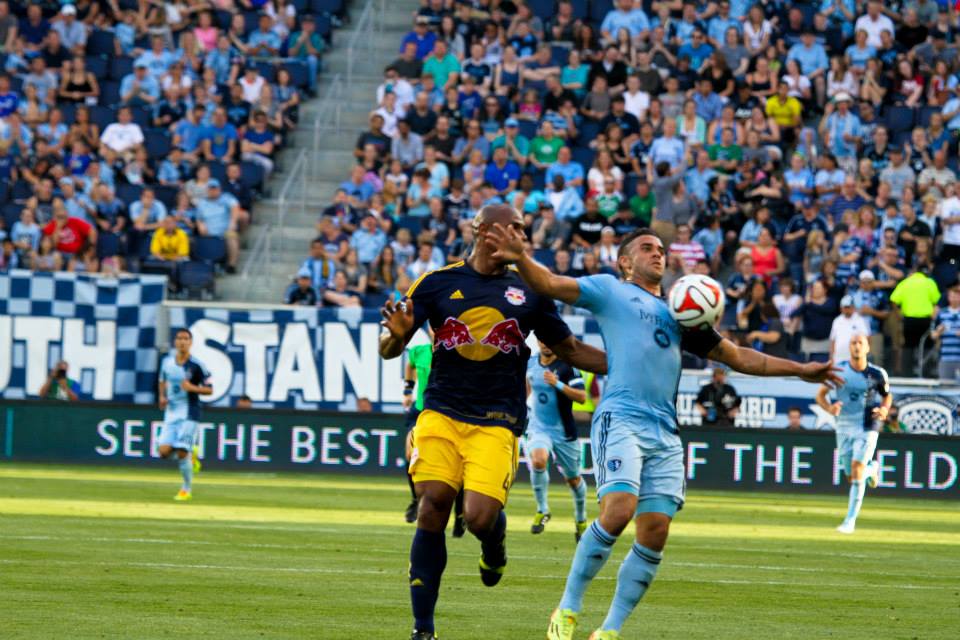 (May 27, 2014) –  Sporting Kansas City moved into sole possession of second place in the Eastern Conference with a 1-1 draw against the New York Red Bulls on Tuesday at Sporting Park. Red Bulls forward Bradley Wright-Phillips scored his MLS-leading 11th goal of the season to split the points after Antonio Dovale had given Sporting Kansas City the early lead with his first career MLS goal in the ninth minute.

Playing the team’s second match in a five-day span, Sporting Kansas City started strong with three near misses in the game’s first five minutes. Defender Igor Juliao, starting his fourth straight match after being acquired on loan from Fluminense, made a 45-yard run down the right flank and nearly finished the individual effort with a chip over Red Bulls goalkeeper Luis Robles if not for a goalline clearance from Chris Duvall.

The New York backline again rescued Robles with another last-gasp block from Jamison Olave in the fourth minute to turn away Sal Zizzo’s header. Just over a minute later, Benny Feilhaber’s free kick from 20 yards out struck the crossbar to leave little doubt about which side had the upper hand in the early stages.

The offensive pressure paid off for Sporting Kansas City with the game’s opening goal in the ninth minute from the foot of Dovale. The 24-year-old Spaniard worked his way into a dangerous spot in the center of the park and unleashed a curling left-footed strike from 25 yards out for his first career MLS goal.

Dovale becomes the eighth different goal scorer for Sporting Kansas City in the 2014 regular season and his ninth minute goal is the earliest scored by the team in 2014. Feilhaber earned the assist, his third of the season and 18th in his MLS career (including playoffs).

After attempting a single shot in the first half, the Red Bulls leveled the match with their first shot on goal in the 50th minute. Thierry Henry picked out Wright-Phillips behind the Sporting KC backline and the English striker buried the breakaway. Ten of his 11 goals in 2014 have come in his last seven matches, including six in the month of May — tied for most in MLS with Sporting KC striker Dom Dwyer.

New York capitalized on the momentum and threatened to pull ahead, forcing Sporting Kansas City goalkeeper Eric Kronberg to record three key saves over the next 15 minutes of the match. Wright-Phillips nearly scored his second of the match but was thwarted by Kronberg in the 53rd minute.

Second-half substitute Peguy Luyindula tested Kronberg with a low drive in the 66th minute only to see his attempt pushed away with a diving save. Kronberg was well positioned on the ensuing corner kick to smother another effort from outside the area, this time from Henry.

Sporting Kansas City weren’t without chances of their own to secure all three points in the second half. Dwyer directed his header narrowly high of the bar on a cross from Juliao in the 65th minute and Robles made a superb stop on Dovale, stretching full extention to protect his near post in the 79th minute.

Both sides were missing three players due to international duty — including Sporting Kansas City captain Matt Besler and midfielder Graham Zusi who started for the U.S. Men’s National Team on Tuesday night against Azerbaijan — and each saw their winless run reach four MLS matches. Sporting Kansas City will return to the road to face D.C. United at 6 p.m. CT on Saturday at RFK Stadium.

The match will air live on KMCI 38 the Spot locally and on SKCTV across the Midwest. The team’s official watch party will be held at Johnny’s Tavern in Overland Park (8719 W. 95th St.) featuring food and drink specials.

By Roberta PardoResearchers nationwide are reporting that pediatric obesity and a condition that often accompanies it, type 2 diabetes, have spiked since the pandemic began,

By Chara The U.S. Centers for Disease Control and Prevention (CDC) has issued new isolation guidelines for people with COVID-19.“The Omicron variant is spreading quickly

Now COVID-19 Boosters are Available for People Ages 12 and Older in Wyandotte County!